I have found my happy place here in Lviv, Ukraine. I don’t think that I ever want to leave. 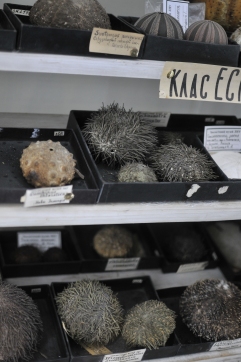 Just down the street from where we are staying there is a zoological museum*. It is run by the University of Lviv. We weren’t 100% sure how to get to the museum but I saw a sign on the outside of the university that read “Зоологічний музей” so I knew we were in the right place. There were a lot of students bustling around but no one seemed to mind us being there. When we went inside we waited at a desk to talk to someone about how to find the museum. A gentleman came out and I asked about the zoological museum but we did not understand each other. He took us to a man that spoke English. He happily said that he would lead us to the third floor to where the museum was located. During our conversation we discovered that this man is a Professor researching the genetics of microorganisms at the university. We were pleasantly surprized when the Professor offered to walk us through the museum and explain the highlights as most of the signs were in Ukrainian. This museum felt like walking into a collector’s curiosity cabinet on steroids! Room after room was filled with glass-doored display cases brimming and overflowing with every creature imaginable! Shells, coral, beetles, deep-sea fish and stuffed sharks, skeletons of tiny birds and even a giant sperm whale! I could go back to this museum day after day after day and always see something new. 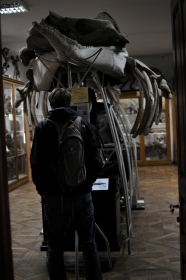 Speaking of something new… I discovered a few extinct animals that I didn’t know about before. This museum of one of only three in the world that have a skeleton of the Stellar’s Sea Cow. This giant manatee-like creature was only scientifically discovered in 1741 and they only lived in a small area in the Bering Sea between Russia and Alaska. They could grow to a length of 30′ and could weigh up to 22,000 lbs. By 1768 the Stallar’s Sea Cow was extinct.

Another new animal that I learned about was Aepyornis Maximus, also known as the Elephant Bird of Madagascar. The zoological museum has a beautiful specimen of one of these bird’s eggs. One egg is about the equivalent of 150 chicken eggs.

I love being surrounded by scientific specimens. It is a treat to get to look closely at animals that I would otherwise never have the opportunity to see. And then I looked down at the small, inscribed label at the foot of the specimen… 1741… 1748… 1780… and realized I was looking into the eyes of creatures that lived over 250 years ago. It makes you think.

After our tour of the museum the Professor asked if we would like to see his lab? Of course we said, “Yes, please!” and he lead us through the winding, stone-walled university to his laboratory. I told him I am an artist interested in scientific whale research. He seemed intrigued at this idea. When he brought us to his laboratory he excitedly talked to us about the beautiful structures and patterns created by colonies of bacteria. He showed us samples of colonies that he had grown himself. He also told us that there are competitions where scientists submit images of their most complex and beautiful colonies and excitedly talked about the possibility of artists working with scientists to create these interesting structures.

*The National Zoological Museum of Ivan Franko was established in 1784 as a Cabinet of Natural History. A hundred years later it was given the status of “Zoological Museum”. The museum’s collection today contains over 178 thousand items.

2 thoughts on “Cabinet of Curiosities”