I have had conversations with marine researchers in a variety of locations–from dusty offices to bustling cafes to chatting on the phone in the font seat of our little NZ car. 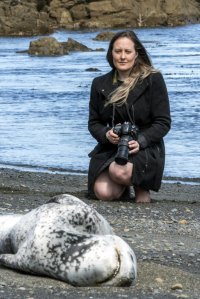 I recently contacted the National Institute of Water and Atmospheric Research (NIWA) to ask if I could speak with someone about their whale research. I was put in contact with Dr. Krista Hupman, a NIWA cetacean biologist. It wasn’t possible to meet in person because she was heading out on a field study, but Dr. Hupman kindly agreed to talk with me over the phone. After a few attempts and some bad reception we finally made contact.

Dr. Hupman explained that a few years ago a leopard seal was spotted in the harbor of Auckland. This was out of the ordinary because leopard seals are known for living in the deep south nearer the Antarctic. The seal was to be forcibly removed because it did not belong in the area. Or so people thought. “But how do we know that they don’t live here?” Dr. Hupman told me over the phone. This is an interesting thought. Up until this point leopard seals hadn’t been researched in New Zealand waters because they weren’t thought to be a native species. This is the exciting thing about science. Boundaries are still being pushed, species classifications are still being challenged and redefined. History is still being made!

Dr. Hupman has been studying Owha, that same leopard seal, for six years now. It was easy to hear the excited in her voice as she talked about Owha. Since this encounter and the building evidence that leopard seals are present in New Zealand, Dr. Hupman has begun the journey to reclassify leopard seals from “vagrant” to “resident”. She is part of a non-profit organization called LeopardSeals.org and has been encouraging the public to help out by reporting sightings and sending photographs. It turns out that there are far more leopard seals coming to New Zealand than expected!

Dr. Hupman has also been involved with a blue whale survey that took place along the coastal waters of New Zealand last year. Interestingly there are two kinds of blue whales that can be found in New Zealand waters: the Antarctic blue whale and the pygmy blue whale. The pygmy blue whales are more commonly found in the Cook Strait region. The researchers saw 14 different blue whales during their expedition and were able to deploy a couple satellite tracking devices to see where these whales were spending their time. Dr. Hupman explained how challenging this type of research can be. Blue whales are cleaver and very fast. If they know they are being followed they can easily change direction and become difficult to find.

One of the first questions I asked Dr. Hupman was whether she has been approached by other artists wanting to know about her work. This was a first for her. I explained my intent to connect with cetology using art and use art as a way of bringing awareness about whales. It was inspiring to hear her talk about her scientific journey and her heart for public outreach and long-term research projects. Long-term projects are challenging to get funding for because they take time, but the results are so much richer. She mentioned how wonderful the long-term research as been on our southern resident killer whales–to watch whales over a lifespan. It is always nice to make a Canada connection.

Through my conversation with Dr. Hupman I discovered a few surprising things: that a cetologist can also have a deep passion for leopard seals, that scientific classifications can still be challenged and redefined, and that some of the largest animals on the planet swim figure eights around New Zealand. Dr. Hupman also told me that someone sent her some leopard seal poo… with a USB stick inside… with photos of leopard seals! It’s true! You can’t make this stuff up. =)

If you are interested to learn more about topics I briefly mentioned in this post, here are a few interesting articles and platforms to check out: