The catch phrase of Kaikoura, a small town on the north western coast of the South Island, is “Where the Mountains Meet the Sea”. Sounds charming. I didn’t understand the true intensity of this phrase before coming here. Founded as a whaling town in 1842 Kaikoura is situated on a peninsula jutting awkwardly into the South Pacific, hemmed in from behind by a band of snow topped mountains. You might not guess it if you looked out across the sea, but not far off shore–just 500 meters away from Goose Bay–is a massive, underwater canyon dropping to depths deeper than two kilometers below the surface. This dramatic submarine terrain is a unique habitat. Upwellings and currents created by the trench provide food for all kinds of marine life. If you are a whale, this is the place to be! 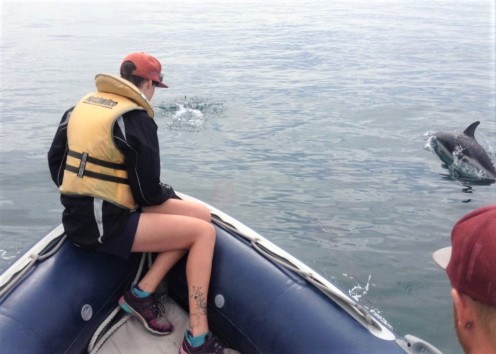 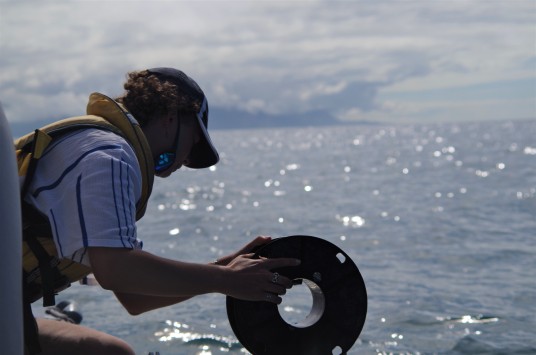 Yesterday I had the pleasure of meeting with two members of the Kaikoura Ocean Research Institute (KORI), Chloe Cargill and Grant Ellis. Originally from the UK, they are in Kaikoura working with the research, public education and conservation efforts of KORI.  Founded in 2012, KORI is a non-profit dedicated to protecting and researching local marine creatures and their habitat. KORI has two key projects underway: KORI’s Hector’s Dolphin Project and P.E.A.P. (Penguin Education and Awareness Program).

KORI’s Hector’s Dolphin Project focuses on New Zealand’s smallest dolphin. These little dolphins are only found in New Zealand and classified as endangered. They are known for their rounded dorsal fin. Their fin is smoothly rounded at birth and over time gets small nicks and notches which become unique to the individual. KORI has been building a photo catalogue of these fins over the past six years. One thing that KORI thrives at is encouraging public engagement–they have even created a Top Fins downloadable page for the public to help with fin identification and add to their database. 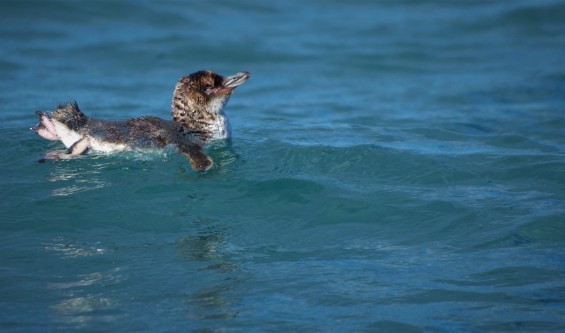 The Penguin Education and Awareness Program is centered around the little blue penguin. This program gives the public a glimpse into their lives and helps educate people on how to best share space with these timid birds. Little Blue Penguins come to the Kaikoura area to nest and molt. Molting is a process where old feathers fall out and new ones grow. Little Blues have a “catastrophic molt”, which means this happens all at once. It takes about two weeks. During this time they cannot return to the water because they lack waterproof feathers.  They are quite venerable while they are land-bound, so public education is important. KORI also operates a penguin education viewing area that is lit with a red light to allow people to observe wild penguins with minimal disturbance.

The people of Kaikoura know they live in a special place and actively do their best to protect it. From my conversation with Chloe and Grant I also learned about other conservation efforts happening in the area run by DOC (the Department of Conservation) and The Hutton’s Shearwater Charitable Trust. The Hutton’s Shearwater is the only seabird in the world that breeds in sub-alpine environments. There are only two surviving colonies in the mountains behind Kaikoura. When the young birds are ready to head to sea for the first time, they leave their nests at night. It is possible that artificial lights in the town confuse the shearwaters and throw off their internal navigation because many crash land in the streets of Kaikoura. Chloe and Grant volunteer as night patrollers, driving through the streets of Kaikoura looking for fallen birds and bringing them to the rehab center where they are banded and later released in the ocean.

It was a pleasure to meet with both Chloe and Grant and learn about the local marine life and conservation. I left the meeting feeling encouraged by the involvement of the community, the dedication of KORI and by learning more about cetaceans! I can’t include everything that we talked about in todays blog because it is already getting long, but later I will tell you what I learned about Dusky Dolphins. I feel so inspired. I am thinking I should expand my embossed Cetacean: Chartwork series to include a piece on Kaikoura… and I am brewing an idea about cetacean-lead-cartography… more to come later.